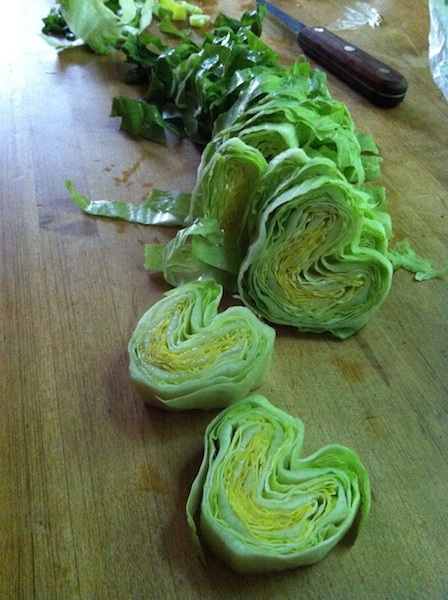 Imagine my surprise at finding a bag of chanterelles in the back of the fridge, when I was expecting the regular shiitakes. I also had a three week old virtus radicchio in perfect condition. What happened next will amaze you!

Don’t those silly teasers drive you up a wall? Me too. What happened next was amazingly delicious and worth sharing, but probably not all that earth shattering. It was a day for using up the produce that’s been in the veggie drawer, waiting patiently for it’s turn in the ring.

Quite a few of the things we get in the shares will live happily ever after for weeks and weeks in the fridge, until you finally get around to noticing it. Here’s what was lurking on my To Eat list:

I took out the cucumber and cleaned it up and started eating it immediately. Then I got out miso and mixed about a tablespoon into about 1/2 to 3/4 cup plain yogurt. I dipped the cucumber in the yogurt dip and ate the entire cuke while starting prep for the stir fry. There was still half the yogurt miso remaining, and that was going to be the topping to my finished dish.

I cut the onions in thick rings and the garlic scapes in 1/2- to 1-inch pieces and got them sauteing while I cut up the peppers. After adding the peppers to the skillet, I and prepped the mushrooms and added them. Then I sliced the radicchio into 1-inch slices–this might be the amazing part because they turned out to be sweet, beautiful little hearts (I heart radicchio.). They almost look like big, happy clown smiles.

Next I added a splash of rice wine over the mushrooms because they are sort of fond of one another. I let that cook off for a second before putting all the radicchio in a layer over the top, adding a generous sprinkling of coarse sea salt and putting a lid on the pan. I let that go for four or five minutes at least, stirred it all together and returned the lid to the pan for an additional 5 minutes or so. When it was cooked just so, I served it up with a dollop of miso yogurt. Delish. How do you say et voila in Chinese? 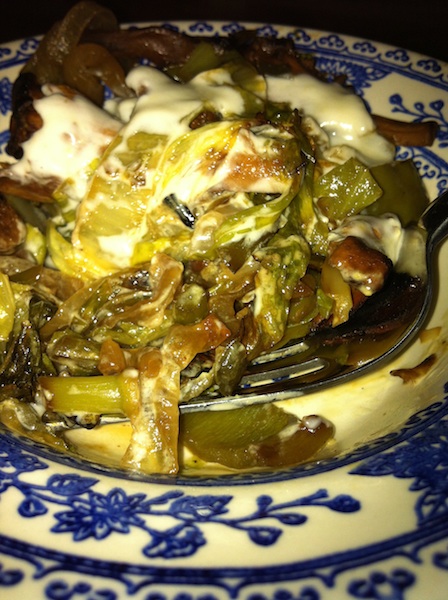 You can use kale instead of the radicchio, or I think cabbage would be a lovely substitute, but you may want to cook it a bit longer to soften it more.

That miso yogurt is a winner too–add a couple drops of sesame oil and a splash of rice vinegar for an even punchier dip or dressing.