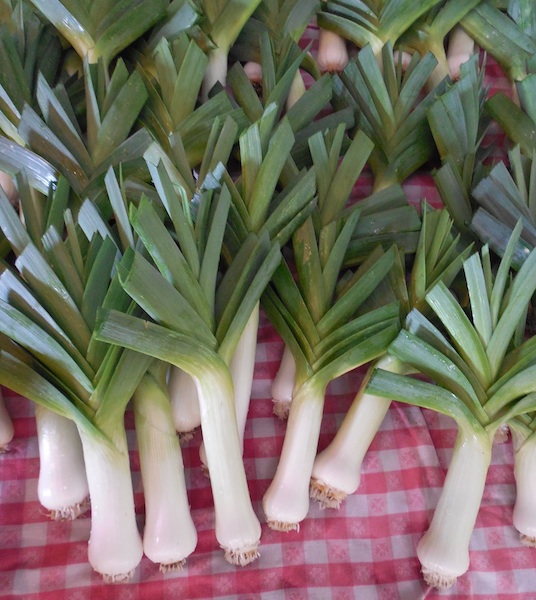 Leeks are to potatoes like jelly is to peanut butter, aren’t they? It isn’t that leeks or jelly are nothing without their pals, but more often than not, leeks are found with potatoes, frolicking together in some delicious dish, be it a soup, fritatta or a casserole. Leeks are also buddies with other starchy friends, pasta and rice, so if potatoes aren’t in season, but leeks are, there is no need to despair.

These certified organic leeks we received from Elixir Farm are beautiful, clean and perfectly trimmed–you could use the whole thing, though the ends of the leaves will be more tender if cooked.

Leeks are an alium, like onions and garlic, and have a mild onion flavor, which mellows when boiled or sauteed low and slow. When fried they get crispy and hold a stronger flavor, and when sauteed slowly they develop an irresistable sweetness. Leeks can also be eaten raw, so feel free to add them to your salad.

If the leeks appear dirty, you may need to soak them because mud can pack down into the layers. No worries. Just slice them and place in a bowl of cold water. Let sit for a few minutes, then agitate them to loosen the mud. Rinse, drain and they are ready to use. If you are planning to fry them, you should dry them with a towel or paper towel first so the water doesn’t pop in the grease.

You can use leeks anywhere you would use onions, but expect a milder flavor. Enjoy!

Here’s a link to a recipe I haven’t tried yet, but intend to soon: