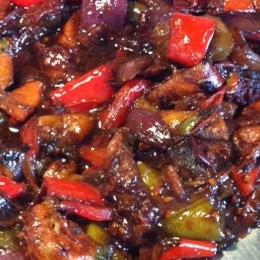 The trick to making this rich, intensely-flavored summer treat so delicious is roasting it to within an inch of its life, allowing the juices to concentrate and caramelize. Serve over pasta, rice, polenta, cooked greens or crostini, or fold into an omelet or a sandwich. Seriously, wow–this is the secret to falling in love with ANY vegetable, and I mean ANY…

Use any amount of any summer produce in any combination. Toss lightly with olive oil and roast in a 400+F oven, stirring every 20 minutes until the juices are pretty well burned onto the sides (if you like it like I do), a couple of hours or longer. Remove from oven and *sprinkle with salt and pepper, and add a generous handful of chopped herbs. Toss and serve hot, allow to cool to room temperature or chill and serve as is or mixed with yogurt as a tapenade on crackers or cucumber slices. So versatile and so delicious.

This is a great way to use tomato seconds. I like to go longer on the tomatoes than the other veggies, and just add a peach or two for a little surprise sweetness, so if you don’t have enough fresh tomatoes, you can throw in a jar of Hilty tomatoes and cook them down.

* Notice I didn’t say to add salt and pepper until after you’ve cooked them down. I’ve made the mistake of salting before roasting, when I started with two pans and cooked them down and down to one half of pan, and I found that the concentrated finished dish was way too salty. (I threw it in the freezer and then added it to a large amount of some other recipe and it made it fantastic, but it was inedible on its own).

Ta daa, you have a new secret weapon and will never be afraid to serve a chef a meal. You’re welcome.