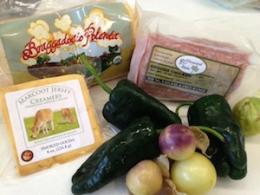 I adapted this recipe from one that called for rice, tomatoes and leftover roasted chicken, versus polenta, tomatillos and ground chicken. You can also make this vegetarian, and feel free to substitute any way you wish. I love poblanos because they pack a little bit of heat and a lot of flavor without rendering your lips numb, like jalapenos tend to do. Although, I do often stuff both jalapenos and poblanos to eat at the same meal, so I guess I kind of like that numb lip thing (no it doesn’t shut her up).

Position an oven rack about 4 inches from the broiler and heat the broiler on high. Line a baking pan that will comfortably fit all the peppers with foil.

Slit the chiles from stem to tip and place in the baking pan. Broil, turning every few minutes, until blackened all over, 5 to 8 minutes. Let cool slightly, peel off the skins, and remove seeds and cores. Return the poblanos to the pan.

Finely chop the tomatoes, and mince the onion and garlic. Heat the oil in a large cast-iron skillet over medium-high heat. Brown the chicken, breaking it into bite-sized chunks, and cook for about 5 to 7 minutes, then add the tomato, onion, garlic, oregano, cumin, cinnamon, and 1/2 tsp. salt. Reduce heat to medium and cook, stirring often, until most of the liquid has evaporated and the mixture has thickened, about 10 minutes. Remove the pan from the heat. Stir in the polenta, and then 1 cup of the cheese, the cilantro, and the lime juice. Season to taste with salt. Divide the filling among the peppers, and pull the sides of the peppers up around the filling, some of which will still be exposed.