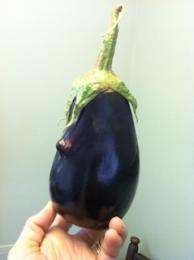 Here’s a recipe from Smitten Kitchen that got a good review from Kevin on the version Arianna made. Although I didn’t try it, that’s not stopping me from making adaptations. Also, because we aren’t getting fresh pasta in this week,* I suggest trying it over polenta, or even rice.

Here’s a recipe from Smitten Kitchen that got a good review from Kevin on the version Arianna made. Although I didn’t try it, you can bet I have an opinion on it. Also, because we aren’t getting fresh pasta in this week,* I suggest serving it over polenta, or even rice.

* Midwest Pasta is getting a new cooler floor in and will not be making pasta this week. We have a few ravioli and gnocchi in the freezer, as well as very few fresh pastas, so check your freezer and use that up.

The original recipe, Rigatoni with Eggplant Puree is here: https://smittenkitchen.com/2008/01/rigatoni-with-eggplant-puree/

You are welcome to go there for the full blog, which includes her pretty pictures and clever wit, but here is my version, along with my thoughts on how I’m going to do it when I make this. (I’ll be the one talking in italics and parentheses.)

1 small eggplant, cut into 1-inch cubes (use whatever size eggplant you have)
1 pint cherry tomatoes (again, use whatever tomatoes you have, especially the ones that are going to rot before you can get to eating them raw, keeping in mind that some tomatoes are a LOT juicier than others, so you may need to adjust liquid amounts accordingly.)
3 cloves garlic, whole (sometimes I think they probably mistyped “cloves” instead of “heads” but you can use your discretion.)
3 tablespoons olive oil (if you cut up an eggplant, 3 tablespoons of oil will be sucked up so fast you won’t even be sure if you really put any on–just FYI so you can either decide to stab the eggplant all over and roast it whole or plan to use a lot more oil. On the other hand, if you use juicy tomatoes, they may provide some much needed liquid.)
1 teaspoon salt
1 teaspoon freshly ground black pepper
1 teaspoon red pepper flakes
1/4 cup toasted pine nuts
1 pound rigatoni pasta
1/4 cup torn fresh mint leaves
3 tablespoons extra-virgin olive oil
1/2 cup grated Parmesan (since I generally eat only what is available from Fair Shares, I would sub one of the cave-aged Marcoot cheeses)
Glug of balsamic or red wine vinegar or freshly-squeezed lemon juice (optional)

Preheat the oven to 400 degrees F. Line a baking sheet with parchment paper.

In a large bowl combine the eggplant, cherry tomatoes, garlic, olive oil, salt, pepper, and red pepper flakes. Spread the vegetables out in an even layer on the baking sheet. Roast in the oven until the vegetables are tender and the eggplant is golden, about 35 minutes. (I like my veggies a bit more caramelized, so I would probably go for nearly an hour.)

While the vegetables are roasting, place the pine nuts in a small baking dish. Place in the oven on the rack below the vegetables. Roast until golden, about 4 minutes. Remove from the oven and reserve.

Meanwhile, bring a large pot of salted water to a boil over high heat. Add the pasta and cook until tender but still firm to the bite, stirring occasionally, about 8 to 10 minutes. Drain pasta into a large bowl and reserve (at least) 2 cups of the cooking liquid. (If using fresh pasta from Fair Shares, it takes about half the time to cook as dried pasta.)

Transfer the roasted vegetables to a food processor. Add the torn mint leaves and extra-virgin olive oil. Puree the vegetables. (If you cook the veggies longer so they are even softer, you can use the stick blender / immersion blender–if you prefer.)

Transfer the pureed vegetables to the bowl with the pasta and add the Parmesan. Stir to combine, adding the pasta cooking liquid 1/2 cup at a time until the pasta is saucy, as well as a glug of vinegar (optional). Sprinkle the pine nuts over the top and serve.