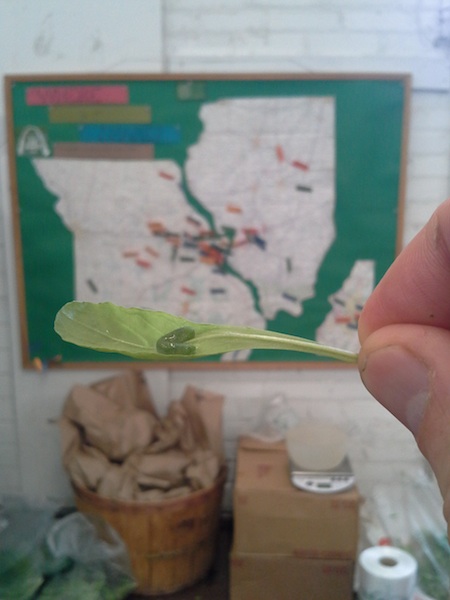 Wash your food! The bugs are really enjoying it, and unless you want to enjoy them (extra protein), you may want to cut the top off that corn…

Everyone knows organic produce is safer and better for us (generally speaking, although industrial organic operations are making that debatable), and most Fair Shares members know what organic produce really looks like.

In some cases, organically-grown fruits and vegetables are the poster child for produce perfection, being lush, ripe, and juicy as well as beautiful to look at. But some produce is just too delectable for the critters to leave it alone, and many times you’ll find aphids in the arugula; bugs in the broccoli; caterpillars in the corn; spiders in the salad mix. In corn season, check the tip of each ear when you get home–those caterpillars will continue eating your ear of corn when you put it in the fridge, so either pick it off or cut it off.

We jokingly say in all seriousness that bugs in the produce means that the food is organic. Live bugs means the produce is fresh! I mean think about it. If bugs who live with the produce growing up don’t want to eat it, doesn’t that set off any alarms? Part of our job (and yours) as supporters of small local farmers growing sustainable food is to educate everyone about this.

Organic produce might not be as big and beefy as conventionally-grown produce because chemical fertilizers aren’t used. It might have holes because no pesticides are used. It might be an heirloom variety that doesn’t get as big and doesn’t travel well (but tastes leagues better than any grocery store variety you’ll find). And it might not hold up for long because it was picked ripe and ready to eat, which means all the flavors, sugars and nutrients were allowed to come to fruition and it will be more delicious, sweet and healthy than anything you’ll find at the store.

All of the things mentioned above are the reason local, organically grown produce costs more than conventional produce, too. Yield is not as great because much is lost to pests, or in the case of many heirloom varieties, they just aren’t bred to produce quantity over quality. Allowing foods to ripen on the plant makes it more susceptible to being over-ripe or being lost to the animals, who are also waiting for juuuuust the right moment. 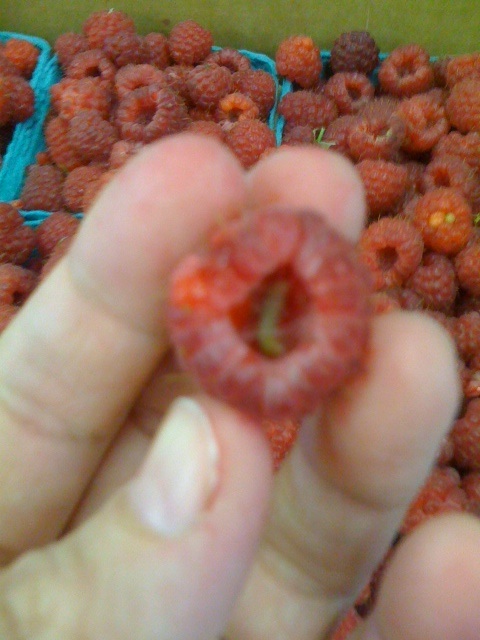 It’s a big challenge for farmers and suppliers to get the tastiest, ripest, healthiest produce to the consumer. What comes in perfectly ripe on a Tuesday afternoon may be overripe by Wednesday at pickup (that’s when we say to eat it on the way home), and compost by Thursday. Industrial agriculture’s answer to these challenges is to pick it green, or create hybrid and genetically modified (GMO) varieties that will look great, travel great and be really cheap, but they have little flavor or nutritional value, and that’s a tradeoff we’re just not willing to make. Cheers to real farmers and real food.