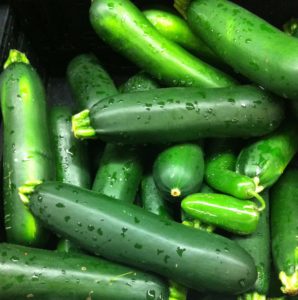 what we have in our local repertoire.
It’s from The Red Cat Restaurant in New York, and the blogger named it as her
favorite recipe of 2008.
– 2 small zucchinis (I’ll probably use one zucchini and one yellow squash)
– 2 tablespoons sliced almonds (I’ll use Missouri Pecan Growers pecans–$8.45/lb.)
– Salt
– Pepper
– 2 ounces of pecorino romano, in long shaved pieces (it’ll be Methuselah for me)
1. Cut the zucchini lengthwise into thin (1/8″) slices, then cut crosswise into
matchsticks. You should have around 2 1/2 cups.
2. Heat the oil over medium heat and when it’s hot add the nuts and cook until they
are golden with just a little bit of pale brown showing which will take about 30
seconds.
3. Add the zucchini, cook for about 30 seconds, add salt and pepper, then cook
about 30 seconds more, stirring the zucchini. As soon as they begin to give off
moisture, they’re done.
4. Divide between two plates, scatter the pecorino shavings on top, and serve.
If you want to do this for more than two servings, use a big enough skillet to keep
the squash in a single or shallow layer, or cook in batches — if you pile too much
zucchini in your pan you’ll end up steaming it rather than sautéing it.