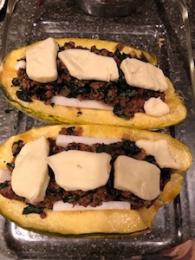 Member Joanne McAndrews offered another stellar-looking recipe that I adjusted to a Fair-Shares-ingredients version. The original version called for artichoke hearts, and no meat. Check out the original from the Eating Well site and see my adaptations (in red).

The photo on the Eating Well site is much nicer than mine because, of course, I forgot to photograph it after baking (I’m that kind of food blogger).

I added my changes and additions in italics.

2. Meanwhile, combine spinach and the remaining 1 tablespoon water in a large skillet over medium heat. Cook, stirring occasionally, until wilted, 3 to 5 minutes. Drain and transfer to a large bowl.

>> I cooked the chorizo in a cast-iron skillet (if you use pork, you may want to skim the fat before adding more to your skillet) with onion. When mostly cooked, I added mushrooms and garlic and cooked until starting to brown. Added spinach and mascarpone cheese.

Position rack in upper third of oven; preheat broiler. Use a fork to scrape the squash from the shells into the bowl. Place the shells on a baking sheet. Stir artichoke hearts, cream cheese, ¼ cup Parmesan, salt and pepper into the squash mixture. Divide it between the squash shells and top with the remaining ¼ cup Parmesan. Broil until the cheese is golden brown, about 3 minutes. Sprinkle with crushed red pepper and basil, if desired.

I used a fork to loosen the squash, but didn’t remove it from the shell. Added chunks of gouda to the squash halves before filling with the stuffing. Topped with mozzarella and broiled.