I took home a bunch of eggplant, peppers, zucchini and tomatoes that needed to be processed, and decided to make a ratatouille. I didn’t really follow a recipe (surprise, surprise), but this recipe from Cookie and Kate is pretty close to what I made in terms of ingredients and process.
I cooked everything for quite a bit longer than she does, which concentrated the flavors and made it all the more rich and delicious. I also found that grating tomatoes is a nuisance and leaves you with weird chunks of skins that are harder to cut up that if you just chop the whole tomatoes. I also added a few hot peppers in my version. Delicious.

These ingredient quantities are approximate–guesses actually–so just use what you have. I have a tendency to use up whatever amounts are on hand rather than saving bits in order to follow a recipe.

Chop everything into small cubes so they will roast evenly.
INGREDIENTS
1 lb. eggplant
1 lb. zucchini, and/or other summer squash
1 lb. peppers, sweet or sweet/hot mix
2lb.-3lb. ripe tomatoes
1 large onion
Olive Oil
1/2.c fresh chopped basil
1/2t. oregano
Salt and pepper
I used a separate pan each for the eggplant, peppers and squash, first tossing each individually with a drizzle of olive oil and LIGHT sprinkle of salt and pepper (you can always add more later, if necessary). 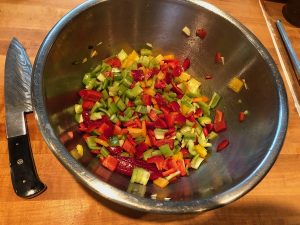 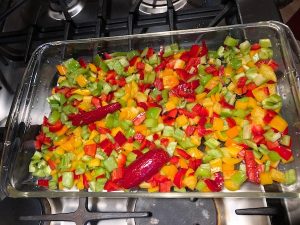 Roast the vegetables at 425F. You can start with any of them and just add the other pans to the oven as they are ready. Stir each after 15 minutes and determine how much longer you want to cook them. As I said before, I cook everything longer than normally prescribed, which adds more caramelization and flavor, but also reduces the bulk quite a bit. 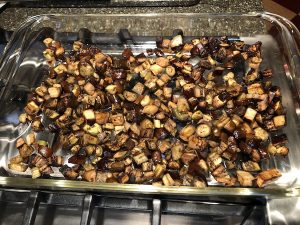 Here’s the eggplant at the first stirring. I probably shoulda/coulda stopped here, but nope! 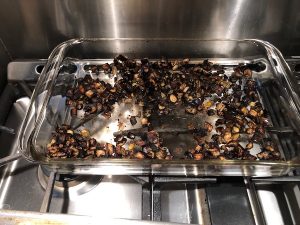 I went all the way to crispy bits! Same with the summers squash and zucchini. 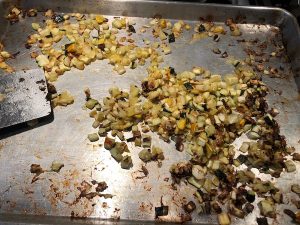 Saute the chopped onions with a sprinkle of salt and a couple tablespoons of olive oil over medium heat in a Dutch oven or pot large enough to hold all the vegetables.
After the onions have softened and begun to caramelize, add the chopped or pressed garlic and stir. Then add the chopped (or grated, or blended) tomatoes and adjust heat to allow them to simmer lightly while your other vegetables finish roasting. 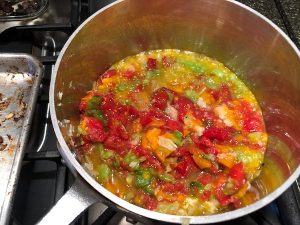 Transfer each pan of vegetables to the tomato sauce as they finish cooking, stirring them in and allowing the flavors to meld. 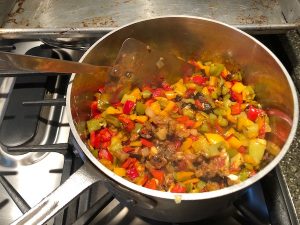 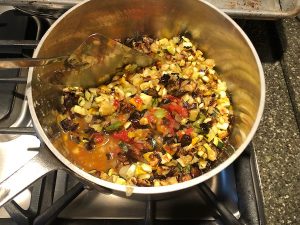 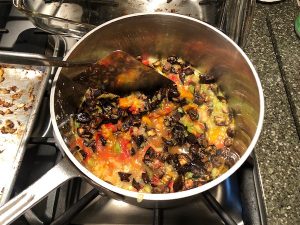 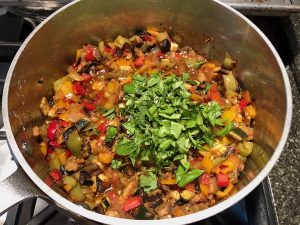 Once everything is in the sauce, turn off the heat and add the fresh basil and about a 1/4 t. crushed oregano. If you aren’t using hot peppers, add about a 1/4 to 1/2t. crushed red pepper. Adjust seasonings and serve as a sauce over pasta or rice, in a bowl with crusty bread, as an appetizer with crostini or crackers, or like shakshuka with an egg cooked in it for brunch.
Leftovers are even better!