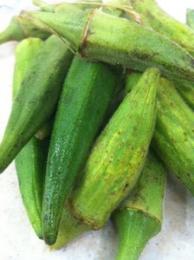 These are great in a Bloody Mary, in case you–like me–no longer go to the grocery store to buy celery, and you need more than a pickle spear in your Bloody Mary (or bloody shame, for you teetotalers). This is a refrigerator pickling recipe, so it doesn’t require canning equipment.

Put the salt, vinegar and water in a pan on the stove to boil while you fill your quart mason jar, putting the garlic, peppers, mustard seeds and dill in first, then packing the okra in on top. Once your brine is at a rolling boil and you’ve stirred to dissolve the salt, pour it over your okra and cap the jar. Don’t screw the ring on too tight–it’ll draw a vacuum as it cools. Allow it to cool for about an hour on the counter and then store it in the fridge. Taste it after a week, then two weeks, but don’t eat it all because it really gets delicious by a month in. This will last in your refrigerator for several months, but it’s unlikely that you won’t have eaten it all by then, anyway.